We're a collaborative community website that anyone, including you, can build and expand. In fact, wikis depend on readers getting involved and adding content. All you have to do to get started is click the Edit button and go!

HyperScape is an upcoming Battle Royale Game, developed and published by Ubisoft that was released on August 11th, 2020. It is Ubisoft's latest offering in the multiplayer genre, bringing Battle Royale to an urban environment: The virtual city of Neo Arcadia where up to 100 players will face off in a battle for dominance - whether solo or as part of a three player squad. 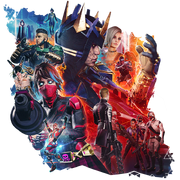 Season 3 is out now! Over 100 rewards in the Hyper Scape Battle Pass which includes new Champions, weapon skins, weapon charms and much more.
Twitter
Links
Need help building out this community?

You can also be part of the larger Fandom family of communities. Visit Fandom's Community Central!

Community content is available under CC-BY-SA unless otherwise noted.
Advertisement